Marathon Automotive was founded in 1980 by Ross Schofield at the Marathon gas station (now a Speedway station) on the corner of US 31 North and 4 Mile Road in Traverse City. After twelve years of consistent growth in the service end of the business, Ross moved Marathon Automotive into its new facility on South Airport Road.

We built our current facility with the vision to be one of the best independent shops in the country. As a leader in the automotive service industry, we integrated some of the most advanced (and common sense) principles into the design of our building.  The shop has lots of south facing windows and a fresh air exchanger that removes harmful fumes and airborne contaminants from the service bays.  Natural light and fresh air make for happy technicians, and happy technicians do better work. 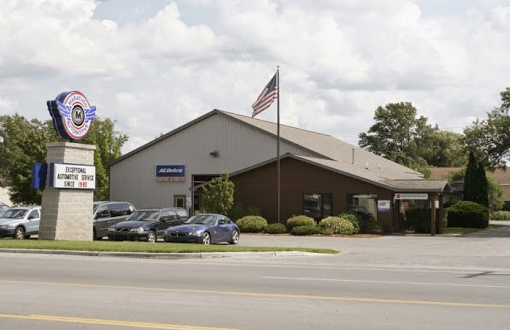 And our innovation did not stop with building design.  We have long known that staying ahead in our industry meant not only keeping up with rapidly changing technologies, but also leading the way in innovation. Since its inception, Marathon Automotive has been recognized as an industry leader, both locally and on a national level.

As early as 1992, we became the first AC Delco Service Center in Traverse City.

In 1994, Vin Waterhouse, a nationally known trainer for NAPA, used Marathon Automotive as a model shop for his seminars.

In 2000 we became the only ASE Blue Seal Shop in Traverse City.

In 2008 we were given the distinction of becoming the only full service AAA Service Center for Traverse City.

Here, “Exceptional Automotive Service” is more than a tag line… it’s what we do!

Shop Tire & Wheels at Marathon Automotive
Get a cutom quote