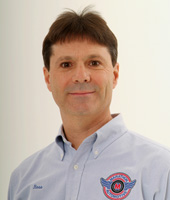 Years of Experience: 51
Years with Marathon: 40

Ross began in the automotive business in 1969 at an Exxon Gas station in Wilmington, Delaware.  Driven by his love of skiing, he moved to Steamboat Springs, Colorado where he lived from from 1973-1978 and owned his own automotive business.  Ross moved to Michigan in 1978 where he attended classes at Northwestern Michigan College in electrical engineering. When Ross realized that a degree in electrical engineering would lead him to an office job in a big city he switched gears and decided to follow his first loves, cars and working for himself.  In 1980 Ross opened Marathon Automotive at the corner of Four Mile and US 31 N in Traverse City and in 1992, after twelve years of consistent growth, Ross moved Marathon Automotive into its new facility on South Airport Road. The service area was designed with the employee in mind with lots of natural light, exceptional ventilation and is very energy efficient (well ahead of its time in 1994).

Most days Ross can be found at the shop managing the business and searching for better pricing on parts and tires to pass along to customers; except in late winter when his workdays are filled with flats fishing, downhill skiing, and roaming the world in search of dangerously named rum. Ross still maintains his ASE Master Technician status, most likely for airfare discounts.

Shop Tire & Wheels at Marathon Automotive
Get a cutom quote